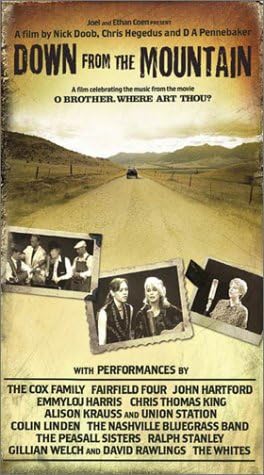 On May 24, 2000, the historic Ryman Auditorium was booked to offer Nashvillians an evening of sublime beauty. Label executives and soundtrack producers so loved the music of O Brother, Where Art Thou? that they brought it to life as a benefit concert for the Country Music Hall of Fame. Filmmakers Joel and Ethan Coen loved it so much that they hired famed documentary filmmaker D.A. Pennebaker to record the show for posterity. The concert that unfolded that night was one of the greatest musical moments in the annals of Music City. Performers: John Hartford, Alison Krauss, Emmylou Harris, Gillian Welch, Chris Thomas King, The Cox Family, Fairfield Four, Union Station, Colin Linden, The Nashville Bluegrass Band, The Peasall Sisters, Ralph Stanley, David Rawlings, The Whites. 98 minutes.

If you love the O Brother, Where Art Thou? soundtrack, D.A. Pennebaker, Chris Hegedus, and Nick Doob's exhilarating concert film "i"Down from the Mountain will be sheer heaven. And if you're new to bluegrass and "old-time mountain-style" music, the performances (also on CD) will be a revelation. John Hartford, Emmylou Harris, Alison Krauss, Gillian Welch, the Cox family, the venerable Ralph Stanley, and other traditional and alt-country artists who contributed the music to the Coen brothers' spaced odyssey gathered onstage in May 2000 at Nashville's Ryman Auditorium to benefit the Country Music Hall of Fame. Interviews and rehearsal footage set the stage for this stupendous concert, highlights of which include "(Didn't Leave) Nobody but the Baby" by the sirens Harris, Welch, and Krauss; the Coxes' "(Will There Be) Any Stars in My Crown"; and Stanley's haunting "O Death." As one performer recommends, "Just ease in, sit down, and listen." It could be your salvation. --Donald Liebenson

Get the hottest holiday gifts

See all Get the hottest holiday gifts

Finish your fit with adidas
- Carousel

Pay Over Time with PayBright